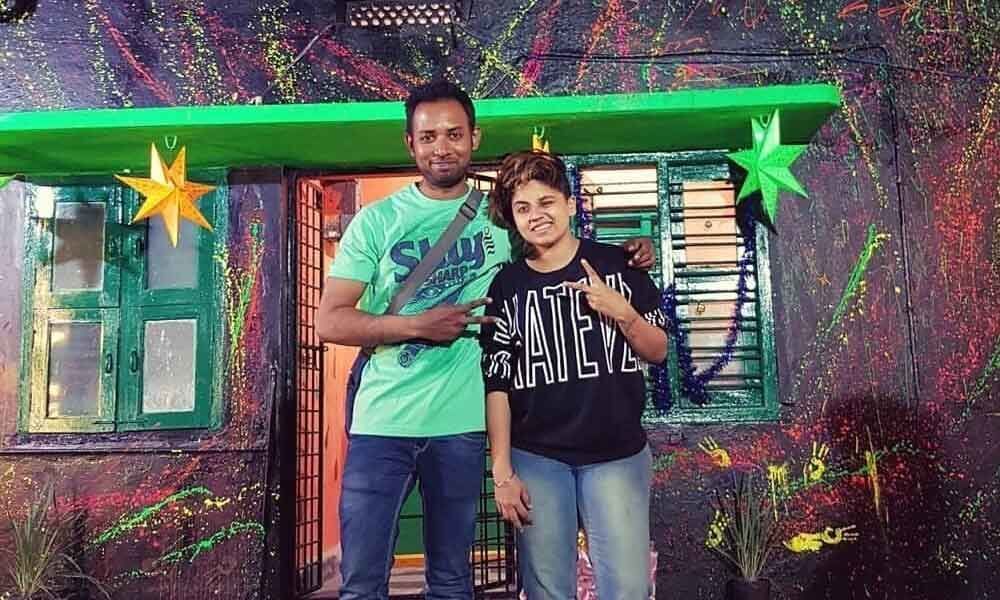 Hyderabad-based Hephzibah and Adam, who completed their graduation in Hotel management took a step forward to make the LGBTQ community feel safer by...

It has been a year since the LGBTQ community officially gained their right to legally be accepted and ever since then the flag of freedom waved high for them.

While the celebration of this moment was taking limelight, people from the community made efforts to utilise their rights to the maximum and so did the duo Hephzibah Smith and Mohammad Adam.

They thought out of the box for the community and started a 'People's Choice' café that supports the LQBTQA+ community.

"Both of us are chefs, we wanted to show people our talent and also do something for the community," they state.

Giving insights into the idea, Hephzibah shares, "I am part of the community, there were times I used to go to lot of cafes, and I have seen lot of indifference.

Once I finished my hotel management, I wanted to do something different, but for that I needed experience and so I worked in places like Goa and kept travelling a lot to understand and visualise people.

In Bangalore I made some queer friends and asked them about their views on a café or a restaurant for the community. They gave me negative feedback, but they were happy about the fact that I wanted to start it.

Last year we were looking for a place for opening the café. It was tough for us, but we opened the café in the month of January this year though I knew nothing about Hyderabad."

"When the pride parade took place, Adam forced me to join to make friends. We spoke to the participants, and now I know the whole community. I just wanted people to be comfortable.

Even though section 377 is out many of them are still sacred to get along. I wanted people to be comfortable and be themselves," she adds.

Though Hephzibah's family was very supportive she had to deal with the neighbours who are around the café. Handling them became difficult for them as they were against the idea.

"Just because I and you agree with the whole concept of section 377, many of them don't. To be honest half of the people do not realise what is LQBTQ and they don't realise that there is a T which resembles transgender. People do not know what is bisexual and transgender."

Dealing with the neighbours, who were against the café running in the colony made the situation difficult for the duo. "We had to call the cops; the owners were supportive.

The cops were on our side and they managed the situation. In the beginning it was difficult but now it is a bit settled."

Hephzibah and Adam are also trying to help the impoverished among the transgender community by educating them."In every area of Hyderabad there is a trans leader whom we contact and ask them if we could teach their community members.

We have not fixed a time and date to teach them, but we have around 17 students, who came up. We don't want them to come to us, instead we are going to them and teaching them."

Having said that doing this work might be tough and scary as well. However, this does not bother Hephzibah, "My family took it as a shock when I told them that I was bisexual.

It was too much for them to understand as I wanted to do something for the community as well. I gave them time. I stayed away for a month.They said that they want to talk to me but till date I never had a conversation with my family.

My family is concerned about me and scared , an wonder what if something happens to me. I know that no matter what happens the community people would be with me at any given time and Adam also managed to convince my family that he would be there to help."

Regarding their relationship as business partners Hephzibah mentions, "I have a lot of OCD's and Adam tries to get me convinced. If he was not there, I do not think that I would have survived so long. He is a calm person and I get annoyed easily.

The best part is that we understand each other and manage our work. We have been best friends for six years. He is not a part of the community; he is an ally, and he wants to work for the community. People hit on him a lot, but he never gets offended."

"We are planning to open our café in Jubliee Hills tooand also open a food truck soon. We would want to utilise this café to educate about the community.

The fact that we opened first in Sainikpuriis because the area is safe for LGBTQ+ community," they share their plans.