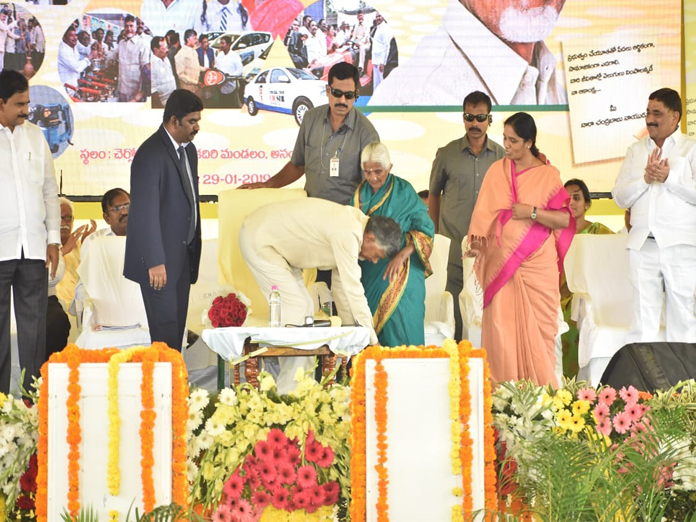 The public meeting at Kadiri turned into a venue for emotional scenes An old lady Mutyalamma from Ontimaddi village of Ramagiri mandal came on to the...

Kadiri: The public meeting at Kadiri turned into a venue for emotional scenes. An old lady Mutyalamma from Ontimaddi village of Ramagiri mandal came on to the dais and handed over a cheque for Rs 50,000 to Chief Minister N Chandrababu Naidu as her contribution to the construction of Amravati city and said that it was a gesture for providing water to the parched lands of Kadiri.

She said the irrigation facilities provided by the government helped her family to raise crops and get good yield. She said she was moved by this gesture of the government and saved her pension amount and decided to contribute Rs 50,000 as a gesture of goodwill in the development of the state.

Moved by this, Naidu touched the feet of the old women and sought her blessings. Later addressing the crowd, Naidu said Mutyalamma had set a very good precedent and she should become inspiration for all those who want to see Andhra Pradesh develop at a faster pace.

Another disabled woman, who had lost her both hands, thanked the Chief Minister for taking a policy decision to provide financial assistance of Rs 10,000 per month for people like her. In addition, she said she was also getting a pension of Rs 1500 and 5 kg of rice.

Naidu said the government had taken the decision to provide Rs 10,000 to all such disabled people as part of its social responsibility. Mere expression of sympathy was not enough but what was required was a helping hand to such disabled people, he added.

Naidu said his government was making all-out efforts to turn Rayalaseema, considered a drought-affected region, into ‘Ratnalaseema’ (land of diamonds). Referring to the way the district was becoming n hub for various manufacturing industries, the CM said the journey in that direction had begun with Kia motors.

At the same time, interlinking of rivers has helped providing water to the parched lands of Rayalaseema so that agriculture can flourish here. However, he appealed to the farmers not to go in for paddy cultivation. He said this region was more suitable for horticulture. Claiming that politically, the district has been a stronghold of the TDP, he said he would strive to make it a number one district in the state.

Naidu criticised the Centre and Prime Minister Narendra Modi for not helping the residuary state. The Centre has been creating all kinds of hurdles and has not been releasing funds that were due to it and in the process even the major Opposition YSRCP had joined hands with the saffron party, he said.