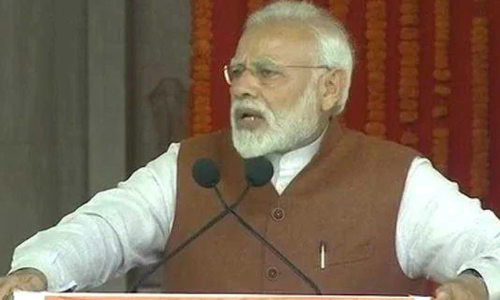 The foundation stone was also laid for the setting up of a new terminal of the BPCL at Krishnapatnam. Modi said the project is not only important for Andhra Pradesh but also for the entire nation to meet its energy needs. He said that these projects will create huge job opportunities.

Later, the PM left for Tirupur in Tamil Nadu, where he commissioned the 10-km stretch of the Chennai Metro Rail through video-conferencing. The stretch connects DMS and Washermanpet and also completes the 45-km long Metro rail first phase in Chennai.

The Prime Minister also laid the foundation stone for a 100-bed ESIC hospital, besides inaugurating a 470-bed modern ESIC hospital in Chennai. He also launched the modernisation and expansion works of Chennai and Trichy airport terminals.

BPCL Ennore Coastal Terminal and the new crude oil pipeline from Chennai Port to its refinery at Manali in north Chennai were also commissioned by the Prime Minister.

The Prime Minister lashed out at the Congress, saying that it ignored the nation's security during its tenure and was associated with several scams in the defence sector. He asserted that the NDA government has a different approach to national security.

Modi said that it is the country's dream to be self-sufficient in defence production and ensure that the forces have all possible support they require in keeping the nation safe.

Modi also dedicated to the nation SPR facilities in Mangalore and Padur. The work for doubling of the Chikjajur-Mayakonda railway line was also inaugurated by the Prime Minister.