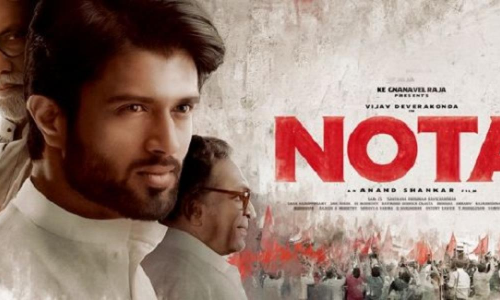 NOTA Movie Review and Rating For the first time in his career, Tollywood heartthrob Vijay Deverakonda starred in a political drama NOTA The young hero is marking his Kollywood debut with this bilingual movie which will be releasing in Telugu and Tamil languages

For the first time in his career, Tollywood heartthrob Vijay Deverakonda starred in a political drama 'NOTA'. The young hero is marking his Kollywood debut with this bilingual movie which will be releasing in Telugu and Tamil languages. Anand Shankar helmed this project. The posters and trailers of the movie have already impressed the audience and the movie has been carrying a good pre-release buzz. Mehreen romanced Vijay for the first time with this film. Studio Green bankrolled this project. As the movie is coming out after the sensational hit of 'Geetha Govindam', the expectations on 'NOTA' have been sky high. Let's check out the review of the movie.

Story:
Vasudev (Nasser) is a corrupted politician who is the CM of a state. Overnight, he takes a sensational decision to make his son Varun (Vijay Devarakonda) who has zero knowledge in the politics as the CM of the state. Above all, he is a party animal and a drug addict who enjoys hanging out with girls. What happens to the state when an inexperienced Vrun takes up the responsibility of as a CM? What did Varun do to survive? How did he manage his position? Forms the rest of the story of the movie.

Performances:
Vijay Deverakonda is definitely a show stealer for the film. His character is the one which creates an impact on the audience and Vijay actually gave life to his character with his wonderful acting. His style, expressions, dialogue delivery are topnotch. Mehreen has never played a character like this before. She gave her best for the role. Mehreen not only looked gorgeous and impressed with her acting as well. Sathyaraj never disappoints us with his selection of roles and here he got another career best role. Nassar delivered a great job. He acted really well and convinced us with his performance. Yashika Aannand got a good role in the film and acted well.

Technical Aspects:
The production values by K.E. Gnanavel Raja under Studio Green are lavish. It is evident that they haven't compromised in terms of budget. Music by Sam C.S. is amazing. The background score elevated the intensity of the scenes well. Cinematographer Santhana Krishnan Ravichandran did a good job. He handled the camera well. Editing is neat. There a lot of boring scenes in the film which could have been avoided and the makers should have concentrated on bringing some Telugu flavour to the film. On the whole, the technical team deserves appreciation for this film.

Verdict:
The story by Shan Karupusaamy is amazing. Director Anand Shankar could not execute the story well. The way he handled the complexity of the story and narration is not really impressive and the audiences will get bored of it easily. The film is not as gripping as expected. As it is a political drama, one would expect some serious political scenes in the film which are completely missing in the movie.
Though Vijay Devarakonda is highly convincing in the film, he could not save the film. The only best part of the film is that it has the content which is relevant to the political climate in the South, especially Tamilnadu. Overall, the film is a weak political genre drama without elements like romance and comedy. It is neither serious nor entertaining.