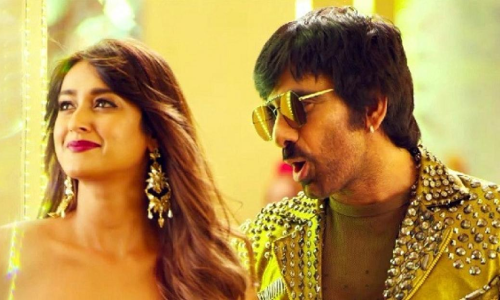 After a series of debacles, director Srinu Vaitla is all set to test his luck again with 'Amar Akbar Anthony'. Ravi Teja who scored back to back disasters like 'Touch Chesi Chudu' and 'Nela Ticket' earlier this year is playing the lead in the film and is going to appear with three different shades. Ileana D'Cruz who has been testing her luck in Bollywood from the past few years is staging her comeback in Telugu with this action comedy-drama. The teaser and trailer have garnered positive buzz around the film. Not only the director but also the lead pair have pinned their hopes on this flick. Let's check out the review of the movie.

Story:
Amar Akbar Anthony deals with 'Dissociative identity disorder'. The story starts with a flashback in 2003 where Two Indian families from New York were killed by their business partners. The family members of the victims, Amar (Raviteja) and Aishu (Ileana) want to take revenge on the culprits. But, both Amar and Aishu suffers from dissociative identity disorder. Did they take their revenge? What happens in the end? Forms the rest of the story.

Performances:
Ravi Teja is undoubtedly one of the major highlights in the film. His energy levels and his outstanding performance became one of the major driving factors in engaging the audience. He gave his career-best performance and will impress us as Amar, Abkar and Anthony. Ileana D'Cruz looked bubbly and beautiful in the film. She delivered a memorable performance and gave us a good comeback. Vikramjeet Virk did a great job. He delivered an excellent performance. Abhimanyu Singh and Tarun Arora also gave powerful performances and acted really well. Laya is wasted in the film. She played a special role and delivered her best performance. Sunil and Sayaji Shinde justified their roles really well. Vennela Kishore's comedy will make us laugh so hard. Satya and Raghubabu also acted well.

Technical Aspects:
Just like his previous movies, Srinu Vaitla has come up with another non-engaging and cliched plotline and has built the entire story around it with comedy and entertainment as the main pillars. He narrated the story well and his mark comedy is one of the highlights of the film. The production values by Mythri Movie Makers are lavish. Most of the shooting is done in the US and the producers haven't hesitated to invest in the film. Music by SS Thaman is good. The songs are just average but the background music is excellent. Especially in the action sequences, the BGM is good. Venkat C Dileep handled the camera well and produced some good and beautiful visuals. The runtime is crisp. The editing by MR Varma is average.

Verdict:
'Amar Akbar Anthony' is a revenge-based story. We have seen so many such films in the past but this one is a little bit different owing to hero's character with multiple shades. Set with the backdrop of New York, Director introduced three characters and tried to make a connection but it felt rushed. The first half is decent with the light comedy. Just like his previous movies, Srinu Vaitla satires on Telugu organizations in the film. The second half started on a dull note and has a lot of shortcomings. Comedy is the highlight for this film. Some of the scenes felt a little bit overboard but overall, the film is underwhelming. Songs are just average. The climax also felt a little bit rushed. Overall, 'Amar Akbar Anthony' is another disappointing effort from Sreenu Vaitla.