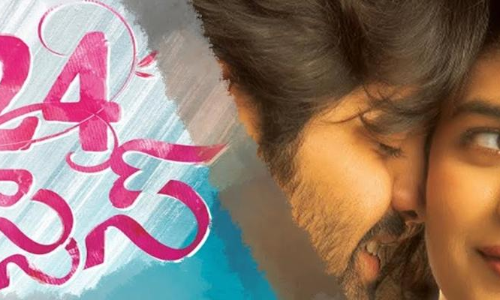 24 Kisses Movie Review and RatingAfter Arjun Reddy, RX 100 etc, another film that tried to attract the youth is 24 kisses From the title to the theatrical trailer, each and every update about the film has created a new controversy

After 'Arjun Reddy', 'RX 100' etc, another film that tried to attract the youth is '24 kisses'. From the title to the theatrical trailer, each and every update about the film has created a new controversy. After creating a sensation on social media and news channels, '24 Kisses' movie Adith Arun and Hebah Patel has finally hit the screens today. Ayodhya Kumar Krishnamsetty helmed this project. The makers have been confidently commenting that their movie is a blend of so many emotions. The bold content of the film has grabbed the attention more. Let's check out the review of the movie.

Story:
Anand (Adith Arun) is a children’s filmmaker. He is not at all interested in marriage. He has a lot of affairs and doesn't want to get married anytime soon. He enters into the relationship with Sri Lakshmi (Hebah Patel) as well. But Sri Lakshmi falls in love with him. After learning his ideology in the institution of marriage, she parts her ways from him. Did the thought process of Anand change? Did he try to win his love back? What happens in the end? Forms the rest of the story.

Technical Aspects:
Apart from the bold content, the director has penned an average story for the film. The uneven pace sometimes irks the audience and disturbs the flow. Producer Sanjay Reddy, Anil Pallala and Ayodhya Kumar Krishnamsetty produced great production values. Though it is a small budget movie, they didn't compromise in investing decent amounts in the project. The music by Joi Barua is too good. One or two will be the highlight whereas the background score is really good. The dialogues are written so well and will connect to the audience. Uday Gurrala handled the camera really well. He produced some wonderful visuals in the movie. Aalayam Anil did a decent job in the editing.

Verdict:
The makers have boasted that there is so much more than the bold content in the film. The movie is far from the expectations but not in a good way. The entire first half is all about smooching which is nothing less than a semi-porn movie. Suddenly, the second half deals with the malnourished poor children and gives a social message. The direction is very poor. The second half is worse than any documentary about the children. With logic less story and pointless direction, '24 Kisses' will test the patience of the audience.

Final Verdict: '24 Kisses' is a pointless drama which can be skipped