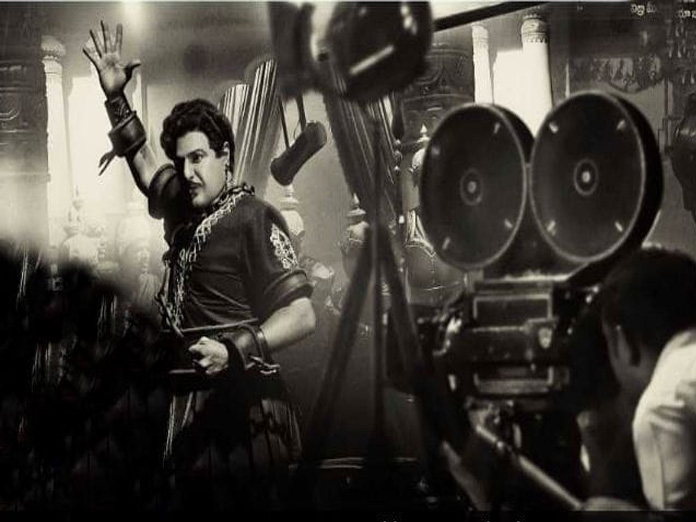 The muchawaited and the most prestigious biopic of legendary actor SrNTR is hitting the screens on 9thJanuary Titled as NTR Kathanayakudu, this is the...

The much-awaited and the most prestigious biopic of legendary actor Sr.NTR is hitting the screens on 9thJanuary. Titled as ‘NTR Kathanayakudu’, this is the first instalment which concentrates on the rise of NTR as a great actor and his struggles in the film industry. Certified with a clean ‘U’, there are huge expectations over this film.

Nandamuri Balakrishna who plays the role of his father onscreen has done a lot of hard work and will be seen in different getups. Bollywood actress Vidya Balan will be seen portraying NTR’s wife ‘Basavatarakam’ in this film while Kalyan Ram and Rana will be seen as ‘Harikrishna’ and ‘Chandrababu Naidu’ resepctively. Many seasoned actors like Prakash Raj, Sachin Khedkar, Himanshu Choudary, Bharat Reddy played crucial roles in this film. Sumanth will be seen as ‘Nageshwar Rao’ while Rakul Preet, Manjima Mohan, Hansika, Payal Rajput, Nitya Menon and many others will be seen in special cameos.

Directed by Krish Jagarlamudi, the film is produced under the banners of ‘NBK Films’, ‘Vaarahi Chalana Chitram’ and ‘Vibri Media’. Renowned composer MM Keeravani gave the music while Sai Madhav Burra penned the dialogues for this film. Gnana Sekhar VS worked on the camera department while Arram Ramakrishna edited this movie.

This film has done a pre-release business of 70 crores which is the highest for any Balakrishna film till date. So, let us see whether the team delivered what is expected from them or not.

Done with Second Half too !!
So far So Good👌. Every scene, Every frame You can see N. T. R in Balayya. KUDOS to Director @DirKrish 😍#NTRKathanayukudu#NTRKathanayakuduOnJan9th#NTR#NTRBiopic#NTRBiopic

Interval...!!! A good 1st half filled with some iconic roles of #NTR gaaru. #NBK & #VidyaBalan shines.