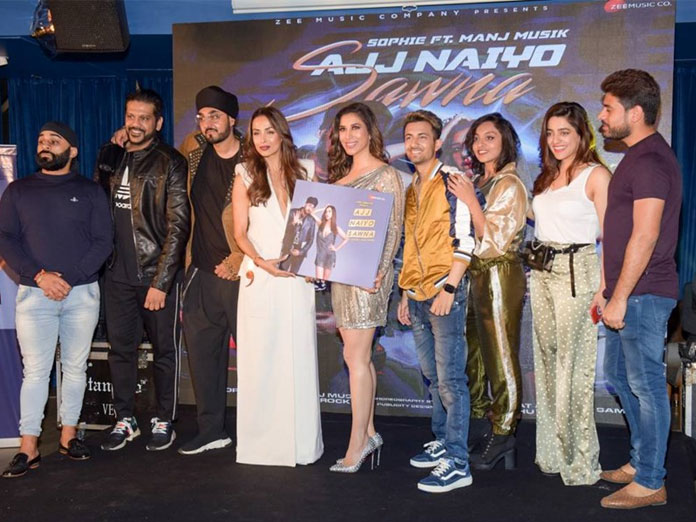 Apart from turning heads with her sartorial choices at public appearances, to making the airport a fashion runway being a global performer with her...

Apart from turning heads with her sartorial choices at public appearances, to making the airport a fashion runway & being a global performer with her band, Sophie Choudry is back with a new announcement. The Ek- Pardesi hit maker revives the pop culture with a hot new collaboration & launched her new single alongside feat. Manj Musik of RDB fame & had Malaika Arora join as the special guest.

At an exclusive preview of the foot tapping Punjabi single held at a popular suburban watering hole, Sophie along with friend & neighbor Malaika made a treat for sore eyes & grooved together to the song featuring Manj. Sophie stole the show in a Monisha Jaisingh short metallic number flaunting her perfect bod pairing it up with classic Christian Louboutin heels. It was an interesting collaboration as Sophie sang Malaika's special songs, Munni Badnam, Chaiyya Chaiyya while the latter sportingly grooved to the songs.

Sophie launched her song, Ajj Naiyo Sawna tonight, a fun song where she crashes a boring party with Manj & gets everybody on the dance floor. Her collaboration with Manj Musik is a first & the two had been planning this for a year now. With epic songs like Saddi Galli, Whistle Baja, Aaja Mahi and have produced the smash hit High Rated Gabru, it is Sophie's first out & out Punjabi number. They had a team from Estonia and the UK shoot the video, Rocky S has styled it and the hugely popular social media sensations Piyush Bhagat and Shazia Samji have choreographed it.

Set to be a fun party anthem Sophie says “It was so awesome collaborating with Manj and singing in Punjabi while keeping the song in my space. At a time when every song is a remix, something I’ve been hugely successful with in the past, it’s really important to come up with original pop songs too and this one is a banger. It's awesome working with Manj & we are already planning our next.'

Manj says “Sophie is the Indian Jennifer Lopez... a fabulous singer performer and this collaboration was really exciting for me. People are going to love seeing her on screen again and our Jodi is super fresh! I left a long gap between my last one and this song but no longer. I’m ready to reclaim my unique space!”

2018 was a year of Punjabi hit songs which made its way into Bollywood! Do we already have the first Punjabi hit of 2019 already?!