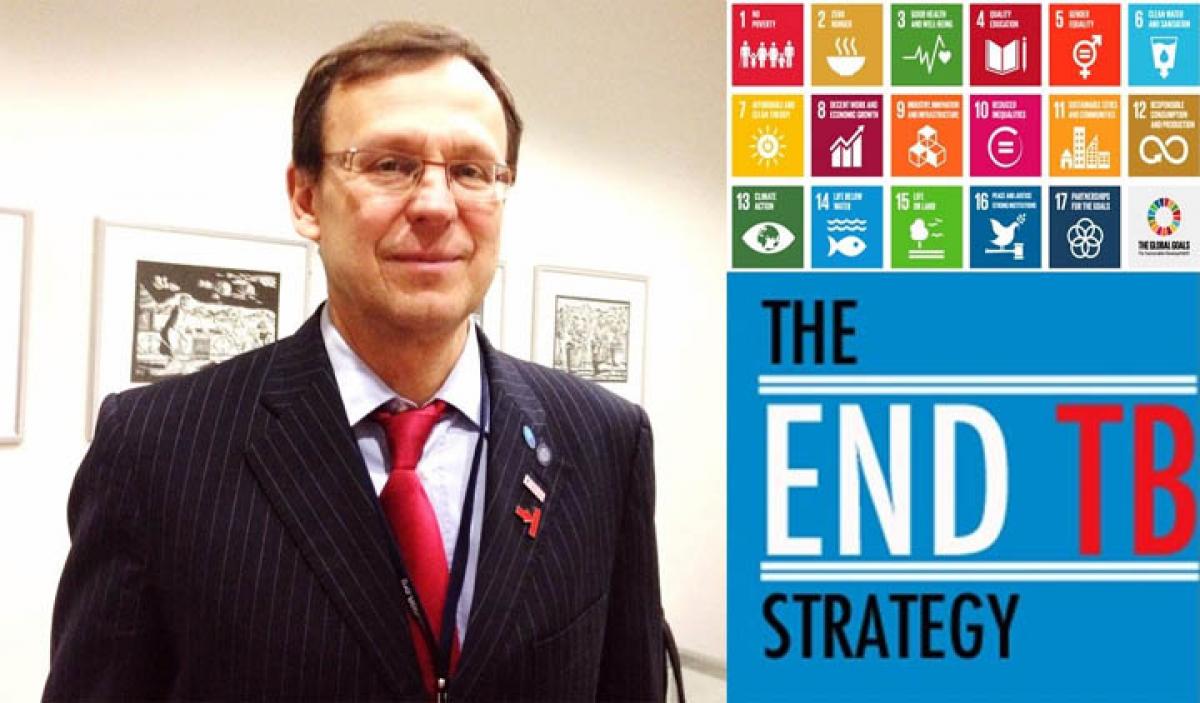 This article is based upon an exclusive interview with Dr Mario Raviglione, Director of the WHO-'s Global TB Programme. Dr Raviglione spoke with CNS...

This article is based upon an exclusive interview with Dr Mario Raviglione, Director of the WHO's Global TB Programme. Dr Raviglione spoke with CNS (Citizen News Service) at the 46th Union World Conference on Lung Health in Cape Town, South Africa.

As we know, the Global Goals for Sustainable Development 2030 adopted by the governments at the 70th United Nations General Assembly in September 2015, present an integrated development agenda.

The Sustainable Development Goal (SDG) 3.3 specifically refers to ending AIDS, TB, malaria and neglected tropical diseases (NTDs) by 2030.
CNS spoke with Dr Raviglione on how will the commitments from the governments globally to SDGs, help accelerate progress on implementation of WHO End TB Strategy. Here is what he shared with us:
[To watch the video interview with Dr Raviglione, go to: http://bit.ly/Ending-TB-by-2030 ]
"The designers of the post 2015 End TB Strategy, had the foresight to align it with the philosophy of what are now endorsed by countries of the UN as the sustainable development goals (SDGs). The End TB Strategy aims to end the global TB epidemic, with targets to reduce TB deaths by 95% and to cut new cases by 90% between 2015 and 2035, and to ensure that no family is burdened with catastrophic expenses due to TB. The Goal 3.3 envisions by 2030 to end the epidemics of AIDS, TB, malaria and neglected tropical diseases and combat hepatitis, water-borne diseases and other communicable diseases. The End TB strategy hinges upon government stewardship and accountability with full participation of civil society and communities. It is based upon protection of human rights, ethics and equity. These are also enshrined in the SDGs.
The End TB Strategy insists upon universal health coverage - providing quality healthcare to all without having them incur catastrophic expenditures. It also stresses upon social protection mechanisms as mostly the TB patients are the poorest of the poor.
All this is incorporated in the End TB Strategy on top of its more technical aspects - make early diagnosis, provide treatment to everyone without distinction, focus on vulnerable population. There is also a push for prophylaxis, especially in populations with higher risks, where saving the life of the patient outweighs the risk of potential side effects. Also, there is need for more research and innovations in TB care and control. It will be difficult to reach the goals unless we transform the way TB is dealt with.
There is evidence now that majority of multidrug-resistant TB (MDR-TB) cases are occurring due to direct transmission. This all the more calls for calls for taking infection control seriously. Unfortunately it’s importance is still not understood. The second pillar of the End TB Strategy talks of bold policies, one of which is that of infection control.
DO NOT NEGLECT INFECTION CONTROL
In most of the low and middle income countries (LMIC) proper infection control methods in healthcare facilities are often not in place.
Unless healthcare facilities adopt strict infection control measures, it will be difficult to contain TB. This would require a policy enforcement at the level of the Ministry of Health to ensure that all hospitals/clinics (and not just TB clinics) infra structure are provided with at least the basic elements of infection control, like proper air flow and ample sunlight, to prevent transmission of infection.
Infection control at home is equally important. For a majority of the TB patients, poor living and housing conditions have a direct bearing on this. so apart from diagnosing and treating TB cases quickly, it is equally important to address the economic and social determinants for TB care and control.
Also there is need to map the TB epidemic to understand where most of the TB patients are coming from. This could be geographical (like slum areas), or population specific —like those with diabetes (who have 3 times higher risk of getting TB), or those with HIV (whose risk of getting TB is 30 times higher), or those who are smokers/tobacco users. But then diabetes is much more prevalent/frequent than HIV. These are the various risk factors. It all is an issue of holistic health promotion and looking at the entire determinants of TB, beyond the obvious ones. We have to talk also about prevention of obesity, diabetes, smoking, alcohol abuse.
TB RATES ARE DECLINING, BUT DECLINE HAS TO BE STEEPER!
At the current 1.5% rate of decline of TB incidence it will take a couple of centuries before we can get rid of TB. The End TB Strategy calls for a drastic acceleration in this decline by bringing it to 10% by the end of 2025. This is doable if countries show their political will reflected in their commitment and investment. It was told in the 46th Union World Conference on Lung Health Perhaps in Russia TB rates are already declining by 10%. Once this is confirmed, it will prove that the target is achievable.
To decelerate by more than 10% new tools will be needed and so investing in research becomes essential. We need to optimise the use of all the tools that are currently available - BCG vaccine, INH prophylaxis, rapid molecular testing, optimum treatment regimens-- and above all hold governments accountable for universal health coverage and social/financial protection for people with TB."
Shobha Shukla, CNS (Citizen News Service)
Show Full Article
Email ArticlePrint Article
More On
Download The Hans India Android App or iOS App for the Latest update on your phone.
Subscribe
Subscribed Failed...
Subscribed Successfully...